It has long been said that The United States of America is a throw-away society. For years, possibly decades, rather than fixing something, we toss it and purchase a replacement. You don’t believe me? Simply do a google search for TV Repair in your area. You could do the same for microwave repair, cell phone repair, etc.

Now don’t get me wrong, I’m not saying some people don’t seek to repair a broken item, and that no TV repair companies exist, I’m simply saying repairing versus replacing is happening less and less. I believe there are several reasons for this phenomenon:

1)      The cost of repairing vs replacing. Often the cost differential is not so great that it seems the wiser choice to go with something new, rather than fix something used.

2)      The time without the item. When repairing, it means that you will be without whatever it is that is being repaired. People cannot imagine being without their phone for a couple of days. I left mine at home by mistake today and feel that a part of me is missing.

3)     The perceived value of the new. Replacing usually means new: New features, new functions; the latest and greatest. In fact, many times, the used item doesn’t need to be broken for us to want to replace it. We want the new shiny thing with all its wiz-bang features, whether or not we will ever fully use the feature. 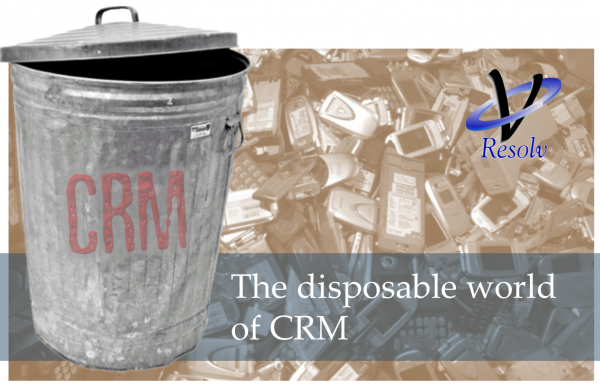 This mentality with or replace over repair that started with personal electronics and appliances has come charging into the corporate world. “Do we keep our current accounting system, or replace it with the latest cloud accounting?” “Our marketing automation system looks outdated, should we look at newer, ‘fresh’ options?” “No-one is using our CRM system, is it time replace it?

Software publishers have contributed to this replace-it mentality. As software publishers move from perpetuity licensing, where you own the version of the software indefinitely, to either annualized or consumption based licensing, they are taking away any feeling of ownership, making replacement a much easier option. Also, as these publishers push to increase market share, they offer incentives to switch to them, pointing out the ease of switching.  After all, “accounting is accounting, right?” “CRM is basically the same: contacts, accounts, and opportunities, so switching is easy.” The unintended message is that if it’s easy to switch to a particular software, it is easy to replace it with the next hot thing.

“What’s wrong with that?” you may ask. We are not talking about a cell-phone here! In the case of enterprise CRM, we are talking a lot of time and money to replace rather than repair the problem. Especially since I have seen that at least 80% of problems with CRM systems are not software related. Oh, there are legitimate reasons for throwing out a CRM system, for example:

There are just as many problems, even more, that have nothing to do with the CRM software:

·        People are tired of entering data in multiple places

·        People can do their job for days without logging into CRM

Take the time to at least define the problem and to dig into its cause, rather than simply opting for a new system and plunking it into the same environment (culture and process); because, unlike replacing your iPhone the cost of switching is great, comes with a lot of down-time (if CRM is properly integrated into your environment), and there is a big chance you will never effectively use the new features that look so tempting.

I’ll go so far as to say, if you can easily dispose of your current CRM and implement another, you probably have had very little success with CRM historically, and will have the same amount of success in the future.  What do you think? Comment with your thoughts.